The Making of "A Small Good Thing"

"[An] acclaimed and poignant documentary."

Boll explored this question in her new documentary “A Small Good Thing.” The film was shot in Berkshire County, Massachusetts and follows six people who have “recast their lives so they can find a sense of meaning.”We live in a world of ever-increasing connectivity, information and thirst for wealth. What happens when these norms are set aside in order to embark on a search for a better life? Academy Award-winning filmmaker Pamela Tanner

The debut of “A Small Good Thing” was met with rave reviews, and the film won the award for Best Documentary at the 2015 Boston International Film Festival. It was also an official selection at the 2015 Berkshire International Film Festival. There will be a screening of “A Small Good Thing” on Sunday, Dec. 6 at 4:30 p.m. and 7:00 p.m. at the Boedecker Theater at the Dairy Center for the Arts in Boulder, during which Boll will speak. Tickets can be purchased online via the Dairy Center’s website.

I had the pleasure of chatting with Boll and finding out more about this acclaimed and poignant documentary, as well as her path to becoming a successful filmmaker. 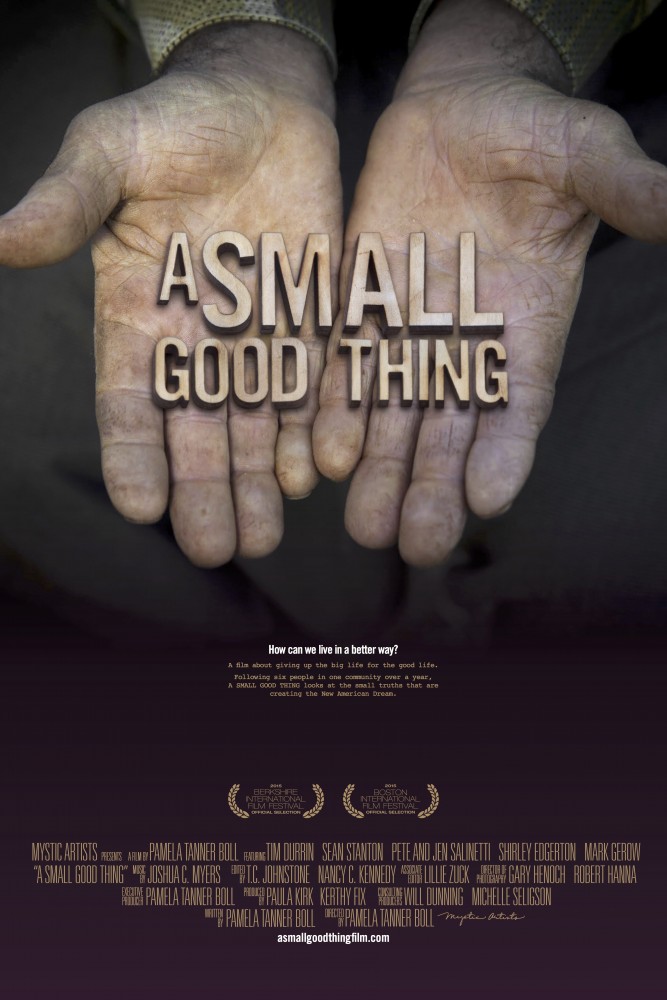 CUI: Have you always had an interest in filmmaking?

Boll: I picked it up later in life. I started out years ago in college. I was a writer and painter, and took a lot of philosophy classes. I was always involved creatively, except for some stints in my early twenties in business. I worked on Wall Street at one point. I got back to my more creative side in my thirties and started painting again and raising three sons. I didn’t start directing until my forties.

CUI: What inspired you to create A Small Good Thing?

Boll: We were entering a new century and it seemed the more we got into the century, the bigger the problems related to environmental issues, climate change — not to mention the disparity between the really wealthy and the rest — really grew. Those were the macro issues. My question was, “Can we live in a better way, can we feed the world, can we not destroy the planet and can we be happier?” I had a big life with lots of successes, but there were plenty of times when I felt stressed, exhausted. Even with all of the connectivity through the Internet, it sometimes felt like I was pretty much alone.

CUI: How did you find the subjects for ASGT? It seemed like they were from all walks of life. Were there any common threads?

Boll: The thread they did have was that each of them changed their lives in some significant way, in a way that they felt would be better for themselves, community and families. In each case, they went through a transformation.

CUI: What was the biggest challenge in filming ASGT? And the most rewarding aspect(s)?

Boll: It is always great to get to know people in a very intimate way. When filming people, you have to gain their trust. It is a slow process for me. You don’t just go in and ram them with a camera. It is always satisfying for me to get people to open up and get them to share the good parts of their lives and also the difficult parts that maybe they didn’t want to share originally.

CUI: What has the general reception been towards ASGT?

Boll: Laughing. Crying. A lot of people walk away from this film thinking, “Huh. I’m so glad you didn’t criticize us, didn’t batter us across the head with what we did wrong.” This film is more of a look on how we can create a better life. We shared it in the Berkshires and everyone got it. Other people write to us a week later and say, “I’ve have been thinking about the film ever since I saw it, and it’s made me think, ‘What can I do differently?’” It creates a longer-term change in people. People really like watching it in small groups and discussing.

CUI: Any plans to distribute ASGT on a larger scale?

Boll: We are showing it in theaters such as the Dairy, and theater situations like that. We are also going to be offering it on the website. You can get a screening license for a small group or larger group. Up to 50 people could see the film, or you could have ten. We will also have a question and answer guide so people can talk about the film. We feel strongly that people will enjoy seeing this film with others instead of just downloading it on the computer. We really wanted to show this film with community in mind. One of the things we learned from the film is that people are herd animals. We like to think of ourselves as individuals, but we like to be around other human beings.

CUI: As the creator of ASGT, what is the most important concept to take away from the film?

Boll: Our well-being. Our sense of happiness is in our hands, not due to circumstances. 40 to 50 percent of how we feel about our lives is in our hands. Even if you had the most boring job in the world or wanted a different family, you can do things to make that job more interesting or reach out to people outside of your family to create that happiness. It’s in our hands.

For more information about the film, visit http://www.asmallgoodthingfilm.com/.

This article was originally published in CU Independent News: